Get Ready to Fish!

Budd Lake, a 175- acre lake, boasts great fishing – in all seasons! A large fish population of muskellunge, bass, pan fish, perch and walleye inhabit the lake. Besides fishing, pleasure boating and water-skiing are also popular activities on Budd Lake. A modern concrete launch ramp is located on the south end of the lake and mooring is allowed along the lake’s shoreline.

This 175-acre lake is Schrouder’s runner-up choice for good muskie prospects. “Budd Lake is smaller than Sanford but hosts a good population of muskellunge,” said Schrouder. “However, most fish taken are smaller, though our surveys have turned up nice muskies in both systems.”The lake is known for muskies. Most are under 40 inches, though larger individuals are occasionally hooked with traditional muskie-sized bucktails, spinners and crankbaits. A forage base of shiners helps the lake to produce good-sized predators. The south end of the lake is shallower, while the rest runs up to 30 feet deep. Drop-offs near the shoreline provide deep-water refuge.A local hotspot is on the southwestern corner of the lake in the submerged vegetation. Another good bet is in the cove along the eastern shoreline toward the north end of the lake.A boat ramp is available off Grant Avenue on the southeast end of the lake, and another is off Lake Road and Bush Street on the west shore. Budd Lake is in Clare County at Harrison. Wilson State Park borders the lake on its northwest corner.More information can be obtained from the Southern Lake Huron Management Unit at (989) 684-9141.

“Budd Lake has been a steady muskie producer for years,” claimed Baker.
The 175-acre Clare County lake has a sizable population of lake chubs and suckers that make for perfect muskie fodder. Regular plants help to sustain muskie populations in the lake.
Because of the lake’s size, finding muskies in Budd Lake isn’t difficult; catching them sometimes is. The best tactic is to cover water by trolling at a fairly good clip while pulling big Bombers, Rapalas and Believers in frog, shad and perch finishes. Fish come from both the north and south ends in 10 to 25 feet of water. A ban on spearing helps protect valuable muskies.
For more information on muskies in Sanford and Budd lakes, contact the Saginaw Bay Management Unit of the DNR at (989) 684-9141.

Get directions from Google Maps to us at Lakeside Motel & Cottages. 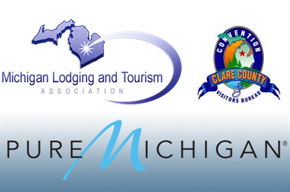